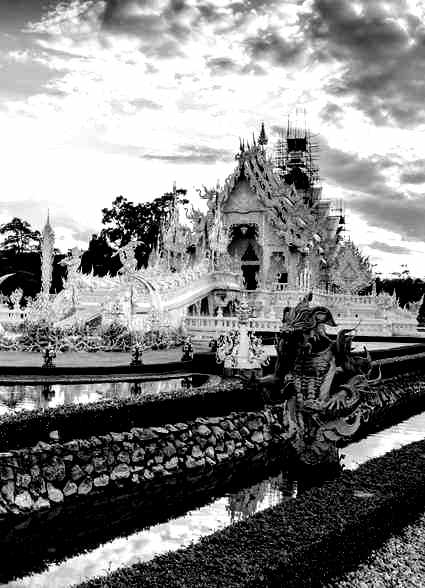 Chiang Rai attractions listed Chiang Rai is small, charming city that provides the perfect base for exploring the scenic and cultural attractions of Thailand’s far north.

Located 785 kilometres north of Bangkok, Chiang Rai is the capital of Thailand’s northernmost province. At an average elevation of nearly 600 metres above sea level and covering an area of approximately 11,700 square kilometres, the province borders Myanmar to the north, and Lao PDR to the north and northeast. The area is largely mountainous, with peaks rising

to 1,500 metres above sea level, and flowing between the hillranges are several rivers, the most important being the Kok, near which the city of Chiang Rai is situated. In the far north of the province is the area known as the Golden Triangle, where the Mekong and Ruak Rivers meet to form the borders of Thailand, Myanmar and Lao PDR Inhabiting the highlands are hilltribes like the Akha, Lahu, Karen, and Hmong.

The region boasts a long history with small kingdoms dat-
ing back to the pre-Thai period, while the city of Chiang Rai was founded in 1262 by King Mengrai. It was temporarily the capital of Mengrai’s Lanna Kingdom until being superseded by Chiang Mai. Today, Chiang Rai is a small, charming city that provides the perfect base for exploring the scenic and cultural attractions of Thailand’s far north.

Commemorating the founder of Chiang Rai, the monumentshould be the first place to visit, since locals believe that respectshould be paid to King Mengrai before travelling further. The monument is located on the city outskirts beside the road to Mae Chan.

In front of Wat Ngam Mueang atop Doi Ngam Mueang in Mueang district the stupa was built by King Chaisongkhram to contain the remains of his father (King Mengrai).

This breath taking temple is located about 10KM south of Chiang Rai City. is a fine example of new wanna religious architecture. The founder Chalermchai Kositpipat who designed , constructed, and opened it to vistor in 1997. This one of the must visit when travel to Chiang Rai

This temple, on Singhakhlai Road, is a fine example of Lannareligious architecture. The Phra Phuttha Sihing image, now at Chiang Mai’s Wat Phra Sing, was originally enshrined here. A copy now sits in its place.

Located behind Wat Phra Sing, Wat Phra Kaeo is noted for itslate Lanna image hall and several fine bronze Buddha images.The temple is more famous, however, as the place where the statue of the Emerald Buddha, now housed in Bangkok, was originally discovered.

This ancient hilltop temple predates the founding of Chiang Raiand commands fine views of the Kok River. It is believed that from this vantage point King Mengrai first surveyed the site
of the city. Situated on a small hill west of Wat Phra Kaeo, the temple has an ancient brick chedi that is the reliquary for the remains of King Mengrai.

It’s located near the Den Ha market, 1 kilometre from the centre of town. The collection showcases objects from the areasonce belonging to, or affiliated with, the Lanna kingdoms: pres- ent north Thailand and some parts of northeast Myanmar, south- west China and Vietnam. Apart from ritual objects the collection mainly consists of objects used in royal courts like lacquerware, silver jewellery, and clothing. A golden bowl once reserved for royals is a masterpiece. It is open daily
from 9 a.m. – 6 p.m.

The site is a museum exhibiting ancient artefacts and written records on history, literature and local know-how as well as exhibits on royal activities by the late Princess Mother at DoiTung. It is open to the public Wednesday – Sunday from 8.30 a.m. until 3.30 p.m.

This scenic river is a major transportation artery from neigh- bouring Chiang Mai province, especially the town of Tha Ton.The river runs some 130 kilometres through the heart of ChiangRai passing on its way several hilltribe settlements and elephant camps from where jungle treks start. Long-tailed boats are available daily for 3-4 hour tours.

Khun Kon, also known as Tat Mok Waterfall, is located about 30 kilometres south of Chiang Rai. The 70-metre waterfall is thehighest and most beautiful in Chiang Rai.

This border town is the northernmost point of Thailand, facing Myanmar across the Mae Sai River, and is located 61 kilometres north of Chiang Rai on Highway 110. The town presents great shopping opportunities for buying popular Thai, Burmese and Chinese goods.

The name translates as “ lagoon of the sleeping lady” and is derived from a natural rock formation that resembles a reclining woman. It is located 12 kilometres before reaching the town of Mae Sai along a 2-kilometre spur road.

Located 1 kilometre north of Khun Nam Nang Non, these caves are known for their spectacular interiors.

This cave, 2.5 kilometres west of Mae Sai, is noted for its beau- tiful stalactites and as a place for meditation.

Located some 40 kilometres beyond Mae Chan, the ruggedmountain of Doi Mae Salong is topped by a settlement known as Santi Khiri, home to descendants of Chinese Nationalistsoldiers who settled in the area in the 1940s. The mountainside plantations of coffee and fruit orchards provide scenic variety, especially picturesque in December and January when Thai cherry trees are in blossom. Hotels, restaurants, horse-riding and trekking are among the major attractions.

This northernmost mountain offers several attractions, includ- ing Doi Tung Royal Villa, built for the late Princess Mother and designed in an architectural combination of Lanna and Swiss chalet styles; the Mae Fa Luang Botanical Garden, with colourful plants and trees of many different species within rock,aqua, palm and flower gardens, and various hilltribe villages.The mountain is topped by the revered temple of Wat Phrathat Doi Tung, which contains Buddha relics and also commands a spectacular panoramic view of the surrounding countryside.

This picturesque hilltribe village is one of the most accessible Akha settlements in Chiang Rai province, located on the way to the summit of Doi Tung.

The site is the domicile of the hilltribe near the Thai-Burmese border, about three hours by road along the Mae Chan-Ban Thoet Thai-Ban Huai In route which winds along a steep preci

pice. The inhabitants are predominantly of the Lisu tribe, with a smattering of Akha, Hmong and Muser. Doi Hua Mae Kham ismost scenic in November when the yellow Wild Sunflowers arein full bloom.

The town of Chiang Saen, delightfully situated on the banks of the Mekong River, is the site of an ancient settlement that pre- dates Chiang Rai and survives in the ruins of city walls, moats, gateways and temples

Eight kilometres north of Chiang Saen, this famous riverside spot marks where the borders of Thailand, Lao PDR and Myan- mar meet at the junction of the Mekong River and the small Ruak tributary. Boats on the Mekong can be hired for travel upstream from Chiang Saen to the Golden Triangle, or down- stream to Chiang Khong.

This small museum is dedicated to the historical settlement of Chiang Saen and its ancient culture, and provides information on archaeological sites and ethnic minorities in the Mekong River basin, as well as displaying exhibits of Buddha images and Lanna artefacts. The museum is open from Wednesday toSunday from 9.00 a.m. to 4.00 p.m. except official holidays.

Wat Phrathat Chedi Luang, built in 1291, is the biggest ancient pagoda in Chiang Rai province, comprising a 5-metre high, brick bell-shaped chedi with an octagonal base. The main hall and other surrounding chedis are in ruins.

Wat Pa Sak occupies a 16-acre site just outside the city walls, 200 metres from the Tourist Service Centre. The chedi, built in 1295, is decorated with ornamental stucco motifs and is regard- ed as one of the most beautiful examples of Lanna architecture in northern Thailand.

This hilltop temple, reached by a flight of 339 steps, has a chedi enshrining the Lord Buddha relic.

This small bell-shaped pagoda built on top of a hill, 4 kilome- tres along the Chiang Saen-Chiang Khong road, commands a spectacular view over the Mekong River and  Lao PDR beyond. The temple houses a magnificent Chiang Saen-style Buddha image.

This riverside temple, near the Sop Ruak Market, offersan amazing panorama over the Golden Triangle and
the surrounding mountains.

The temple is located within the city wall, built by Prince Thong Ngua, a son of King Tilokkarat, the 12th ruler of Lanna,in 1489. A 1,200-kilogramme Buddha statue was cast. NamedPhra Chao Lan Thong, it has a lap width of 2 metres and is over3 metres high. Another statue called Phra Chao Thong Thip wasalso cast in brass and in the Sukhothai style.

This is the area where pla buek, or giant freshwater catfish, weighing up to 300 kg. are caught in the Mekong from April toJune.

This Thai Lue community, located 25 kilometres along the Chiang Saen-Chiang Khong road, is noted for its hand-woven cotton.

This mountain, some 25 kilometres south of Doi Pha Tang, is characterised by high, steep cliffs providing a panoramic view over Lao PDR. Its highest peak points out sharply towards the sky. Mist commonly shrouds the mountaintop in the early morn- ing, especially in the cool season. During February, white wildflowers, known as dok siao, dot the area.

Some 32 kilometres from Amphoe Wiang Kaen (127 kilome-tres from Chiang Rai town), this scenic 1,638-metre mountain is home to Hmong and Yao ethnic minorities, and affords fineviews of the Thai-Lao border. During December and January, the area is rendered even more picturesque with cherry blos- soms and, in the morning, mountain mists.

This park, some 65 kilometres south of Chiang Rai town, covers an area of 1,170 square kilometres and extends into parts of Chiang Mai, Lampang and Phayao provinces. The park’s major attraction is the Pu Kaeng Waterfall.

This waterfall is in Doi Luang National Park located in Phan district. To get there, drive down the Chiang Rai-Phayao route for 58 kilometres to arrive at Bang Pu Kaeng. At Km 77. take a right turn and drive on for another 9 kilometres to a large wa- terfall amid virgin jungle with water cascading down limestone brooks. There are camping areas and jungle trekking services.

This community located about 16 kilometres from the districtoffice of Wiang Pa Pao. Here they found remains of ancient fur- naces used to make terracotta utensils. The furnaces are shapedlikes turtle shells of various sizes with a width of 2 to 5 metres.

The hot springs located at Tambon Mae Chedi Mai on theChiang Rai – Chiang Mai road at Kms. 64 – 65, next to a stream.Villagers sell eggs to tourists to boil in the hot springs.

At Tambon Mae Chedi Mai of Wiang Pa Pao district, the park can be reached by taking the Chiang Mai-Chiang Rai route (Highway No. 118). The park headquarters is right next to the highway at Kms. 55-56 Visitors wishing to undertake a jungle trek and camp within the park need to have the services of a guide and prepare their own camping equipment. The trek through the Khun Chae jungle is for adventure travel enthusiasts as the route passes over steep terrain and several hilltops andcliffs over 1,400 metres high. There are good viewpoints and trekkers can enjoy waterfalls, flowing streams and virgin jungleareas lush with plant life.

End of January or early February held to commemorate King Mengrai as the founder of Chiang Rai and the Lanna Kingdom, the festival features parades, cultural performances and various competitions.

13-15 April, Songkran, the traditional Thai New Year, is wellcelebrated at Chiang Saen, where boat races between teams from Thailand, Lao PDR, China and Myanmar are held on the Mekong River. Cultural shows and beauty contests to crown the Queen of the Golden Triangle are other attractions.