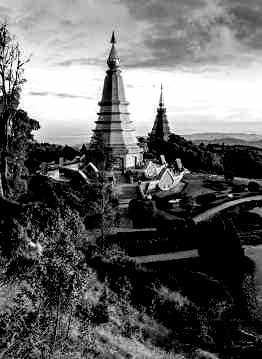 CHIANG MAI ATTRACTIONS Popularly known as “The Rose of the North” and with an enchanting location on the banks of the Ping river, the city and its surroundings are blessed with stunning natural beauty and a unique indigenous cultural identity.

The temple, on Suthep Road, was built in a 14th-century Lanna king’s pleasure garden and is most notable for its several white Chedi, which contain the ashes of members of Chiang Mai’s former Royal Family. Enshrined in a secondary chapel is a 500- year-old bronze Buddha, one of Thailand’s largest metal images.

Located within the old walled city on Ratchaphakhinai Road, this is Chiang Mai’s oldest temple, believed to date from 1296, when King Mengrai allegedly lived here while the new city of Chiang Mai was under construction. The temple is noteworthy for its fine Chedi supported by rows of elephant buttresses and a beautiful chapel, while enshrined within are the ancient Buddha images of Phra Kaeo Khao, a tiny crystal statue thought to have the power to bring rain, and Phra Sila Khao.

Here, on Phrapokklao Road, is the largest Chedi in Chiang Mai measuring  98m. tall and 54 m. wide. It was originally completed in 141 but partially collapsed due to an earthquake in 1545. Among other features is a magnificent Naga staircase adorning the chapel’s front porch. Wat Chedi Luang is also notable as one of the temporary abodes of the Emerald Buddha, now enshrined at Wat Phra Kaeo in Bangkok.

Located near the Chiang Mai Stadium, Wat Ku Tao is remark- able for its unusual bulbousChedi, shaped like a watermelon and thus prompting its Thai name. The structure is decorated with coloured porcelain chips and is believed to represent five monks’ alms bowls.

Away from the town centre on the Super Highway, north of the Huai Kaeo Nimmanhemin intersection, the temple is charac- terised by its square Chedi with seven spires. The design was.

Located on Suthep Road, this delightful meditation temple, founded in the reign of King Mengrai, is very different from Chiang Mai’s other major temples and enjoys an almost bucolic setting. Its principal architectural feature is a large ancient Chedi.

Southeast of Chiang Mai between KM 3-4 on the Chiang Mai- Lamphun road, the site is an ancient city built by King Mengrai prior to the founding of Chiang Mai. Uncovered by archaeolo- gists are the ruined remains of some 20 ancient temples and other buildings.

Standing next to Wat Chet Yot and in modern Lanna style, the museum houses an interesting collection of northern arts and crafts. Open Wednesday to Sunday from 9.00 a.m. to 4.00 p.m except on Songkran and New Year.

On display here is fascinating collection of domestic and foreign insects, as well as animal fossils. The museum is located at 72 Nimanhemin, Soi 12 Tel.053211891

Beside Chiang Mai University, this attractively landscapedgarden contains many kinds of tropical trees and flowers.

Next to Huai Kaeo Arboretum, this is a large and extremely well-managed zoo occupying the lower forested slopes of Doi Suthep mountain and showcasing more than 200 species of Asian and African mammals and birds, as well as some adorable pandas named Thewa and Thewi. Open daily from .00 a.m. to .00 p.m. Restaurants and a camping site are available.

Close by the zoo, this 10-metre cascade provides a green and scenic picnic spot.

Situated 15 km. from town, this is Chiang Mai’s most famous and most visible landmark, and at 3,520 feet above sea level, it commands an exhilarating view of the city and surrounding countryside. Dating from 133, the temple is approached by a flight of 290 Naga-flanked steps (although the less energetic may ascend by a funicular railway), and is dominated by a golden Chedi which contains holy Buddha relics and attracts Buddhist pilgrims from all over the world.

Further up the road from the foot of Wat Phrathat Doi Suthep, the Phu Phing Palace is the Royal winter residence, built in 11. The lavishly landscaped gardens and grounds are open to the general public daily from .30 a.m. to 4.30 p.m. except when the Royal Family is in residence.

This Hmong village lies some 3 km. from Phu Phing Palace.
It is the most accessible of hilltribe villages and has accordingly lost some of its authenticity, although it still provides a glimpse of tribal life.

Situated at the foot of Doi Suthep Mountain, the monument honours the devoted Buddhist monk whose followers built the first 10- km. paved road to Wat Phrathat Doi Suthep in 1935.

Located at the beginning of Chiang Mai-Hang Dong road (Highway 10), the Centre has an excellent collection of Lanna Thai art. It is also the venue for folk dance performances and typical northern-style khan tok dinners. Open from 7.00 a.m. to 9.30 p.m.

Located 5 km. from town, this intriguing temple dates from the mid-1400s and houses a collection of bronze Buddha images while a holy Buddha relic is enshrined in the secondary chapel.

The temple, between KM 43 and 44, was built by the Mon Queen Chamma Thewi in 658 AD. The hilltop location, reachedby a flight of 241 steps, affords fine views of the Ping River andsurrounding countryside.

Chiang Mai’s most photographed waterfall lies some 58 km. from town at the foot of Doi Inthanon. The picturesque setting is a popular pinic spot.

A 10-minute drive and a 2-hour walk from Mae Klang, this large cave has stalactite and stalagmite formations, Buddha im- ages and a rocky stream.

The 1,005-sq. km. park encompasses Thailand’s highest peakwhich rises to 2,565 metres above sea level. Rich in flora andfauna, especially bird life, and with waterfalls, nature trails and Hmong and Karen hilltribe villages, the park as a whole is one of Chiang Mai’s top attractions and well worth visiting.

Located in Khum Klang village, close to the park headquar- ters, this royally initiated research station was established in 1979 to help hilltribe farmers to cultivate temperate-clime cash crops instead of opium and to train them in modern agriculturalpractices. The flower plantation and the plant and breedingresearch lab are open to visitors.

At Ban Mae Ha in Hang Dong district, this royally initiated project is a research and cultivation centre for roses. The main attraction is the 8.4-acre Royal Rose Garden, best seen between October and February.

These twin pagodas, located at KM 41.5, were built tocommemorate the fifth cycle birthdays of Their Majesties KingBhumibol Adulyadej and Queen Sirikit.

This picturesque gorge with a river zigzagging between high, steep cliffs, is located 105 km. from Chiang Mai. The area is pleasantly framed by teak forests and hills.

Also renowed for its high quality traditional cotton, this village is reached after a left turn between Km. 69 and 70 along the Chiang Mai-Hot road.

At Ban Mae Ha in Hang Dong district, this royally initiated project is a research and cultivation centre for roses. The main attraction is the 8.4-acre Royal Rose Garden, best seen between October and February.

There are several orchid nurseries in the Mae Sa Valley area where visitors can view these exotic year-round blooms. Someorchid farms also have special butterfly enclosures where tropi- cal species can be seen in a natural environment.

This 8-tiered waterfall in Mae Rim district is 26 km. from town and occupies a lovely setting among towering trees.

This international botanical garden, located around 12 km. along the Mae Rim-Samoeng road and extending over
a mountainous area of 560 acres, was established to honour Queen Sirikit in 1992. The garden has an excellent collection of Thai and foreign plants laid out according to species and climate, and foreign plants laid out according to series and climate, and there are three walking trails. Also here is a Tourist Information Centre, the Thai Orchid Breeding Centre, the herbs Museum and the Research Centre. Open daily from 8.30 a.m. to 5.00 p.m.

Located off Highway 10 at KM 57 between Mae Taeng and Chiang Dao, this is one of a number of elephant camps in the area which put on shows of work elephants displaying their forestry skills. Open from 8.00 a.m. to 3.00 p.m. daily. There are shows starting at 9.00 a.m. and 10.00 a.m.

Sacred Buddha images can be seen in the cave complex of Wat Chiang Dao at KM 72 on Highway 10. The caves are illumi- nated by electric lights.

This cone-shaped limestone mountain in the Chiang Dao Wild- life Reserve rises to 2,195 metres above sea level, which makes it Thailand’s third highest peak after Doi Inthanon and Doi PhaHom Pok. The area is rich in highland flowers, birds, and but-terflies. Permission to visit the mountain must be obtained fromthe National Park, Wildlife and Plant Conservation Department.

The park, accessed via the Mae Malai-Pai road, covers an area of 180 sq. km. in the Mae Taeng and Pai districts of Chiang Mai and Mae Hong Son provinces. Forested highland ranges and panoramic views are among the attractions.

This is the location of a Royal agricultural station, 163 km. north of Chiang Mai, which is a demonstration site for the re-search and cultivation of flowering plants, temperate fruit trees,vegetables and other crops under the patronage of His Majesty King Bhumibol Adulyadej. Outside the agricultural station, the area of Doi Ang Khang is a nature resort where activities in- clude trekking, mule-riding and mountain-biking can be found.

Sited on the banks of the Kok River, close to the border with Myanmar, this small town is full of atmosphere and has a few interesting sights, such as Wat Tha Ton. However, it is best known as the starting point for longtail boats trips downriver to Chiang Rai, a thrilling 3 1/2 hour journey that passes hilltribe villages and jungle scenery. It is also possible to hire bamboo rafts for the same trip, the journey taking 3 days.

This district, 13 km., is famous for its silk and cotton weav-ing. The village showcases finished products as well as the
silk- weaving process. On the way from Chiang Mai to San Kamphaeng, the road is lined with factories and souvenir shops selling woodcarving, silverware, earthenware, lacquerware, and cotton fabrics.

Located 3 km. from town and set amid natural surroundings of trees and verdant hills, these springs have water with a high sulphur content and possess curative and restorative proper- ties. Accommodation, a swimming pool, dining facilities and segregated mineral water bathing rooms are available. Nearby is Rung Arun Hot Sping Resort which offers bungalows, mineral baths and an excellent park setting. 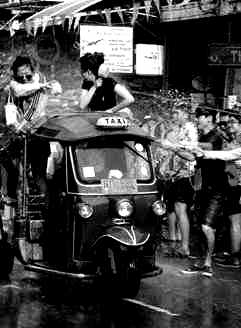